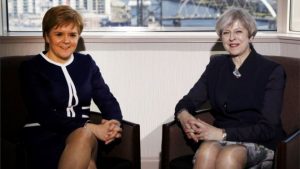 UK prime minister Theresa May today declared that it was too early for Scots gnats to appear.  Speaking through her mouth in Edinburgh, Mrs May said: “We have only just changed to British Summer Time and the weather is still a bit cold. It is too early for gnats to appear or any sort of flying insect such as midges.”

A spokesman for the prime minister later denied that she had been referring to Scottish first minister Nicola Sturgeon, who is 5 foot 4 inches tall. Mrs May, who is 5 foot 8 inches said things would have to get hotter before the Scots gnats would make an appearance.

Ms Sturgeon responded by telling the prime minster: “As things are going now, it won’t be long before come to boiling point.”